A capable wife who can find?
She is far more precious than jewels.
The heart of her husband trusts in her,
and he will have no lack of gain.
She does him good, and not harm,
all the days of her life.
She seeks wool and flax,
and works with willing hands.
She is like the ships of the merchant,
she brings her food from far away.
She rises while it is still night
and provides food for her household
and tasks for her servant-girls.
She considers a field and buys it;
with the fruit of her hands
she plants a vineyard.
She girds herself with strength,
and makes her arms strong.
She perceives that her merchandise is profitable.
Her lamp does not go out at night.
She puts her hands to the distaff,
and her hands hold the spindle.
She opens her hand to the poor,
and reaches out her hands to the needy.
She is not afraid for her household when it snows,
for all her household are clothed in crimson.
She makes herself coverings;
her clothing is fine linen and purple.
Her husband is known in the city gates,
taking his seat among the elders of the land.
She makes linen garments and sells them;
she supplies the merchant with sashes.
Strength and dignity are her clothing,
and she laughs at the time to come.
She opens her mouth with wisdom,
and the teaching of kindness is on her tongue.
She looks well to the ways of her household,
and does not eat the bread of idleness.
Her children rise up and call her happy;
her husband too, and he praises her:
“Many women have done excellently,
but you surpass them all.”
Charm is deceitful, and beauty is vain,
but a woman who fears the Lord is to be praised.
Give her a share in the fruit of her hands,
and let her works praise her in the city gates.

Happy are those who do not follow
the advice of the wicked,
or take the path that sinners tread,
or sit in the seat of scoffers;

but their delight is in the law of God,
and on God’s law they meditate day and night.

They are like trees planted by streams of water,
which yield their fruit in its season,
and their leaves do not wither.
In all that they do, they prosper.

The wicked are not so,
but are like chaff that the wind drives away.

Therefore the wicked will not stand in the judgment,
nor sinners in the congregation of the righteous;

But the ungodly by their words and deeds summoned death;
considering him a friend, they pined away
and made a covenant with him,
because they are fit to belong to his company.
For they reasoned unsoundly, saying to themselves,
“Short and sorrowful is our life,
and there is no remedy when a life comes to its end,
and no one has been known to return from Hades.

“Let us lie in wait for the righteous man,
because he is inconvenient to us
and opposes our actions;
he reproaches us for sins against the law,
and accuses us of sins against our training.
He professes to have knowledge of God,
and calls himself a child of the Lord.
He became to us a reproof of our thoughts;
the very sight of him is a burden to us,
because his manner of life is unlike that of others,
and his ways are strange.
We are considered by him as something base,
and he avoids our ways as unclean;
he calls the last end of the righteous happy,
and boasts that God is his father.
Let us see if his words are true,
and let us test what will happen at the end of his life;
for if the righteous man is God’s child, he will help him,
and will deliver him from the hand of his adversaries.
Let us test him with insult and torture,
so that we may find out how gentle he is,
and make trial of his forbearance.
Let us condemn him to a shameful death,
for, according to what he says, he will be protected.”

Thus they reasoned, but they were led astray,
for their wickedness blinded them,
and they did not know the secret purposes of God,
nor hoped for the wages of holiness,
nor discerned the prize for blameless souls;

It was the Lord who made it known to me, and I knew; then you showed me their evil deeds. But I was like a gentle lamb led to the slaughter. And I did not know it was against me that they devised schemes, saying, “Let us destroy the tree with its fruit, let us cut him off from the land of the living, so that his name will no longer be remembered!” But you, O Lord of hosts, who judge righteously, who try the heart and the mind, let me see your retribution upon them, for to you I have committed my cause.

Save me, O God, by your name,
and vindicate me by your might.

Hear my prayer, O God;
give ear to the words of my mouth.

For the insolent have risen against me,
the ruthless seek my life;
they do not set God before them.

But surely, God is my helper;
God is the upholder of my life.

God will repay my enemies for their evil.
In your faithfulness, put an end to them.

With a freewill offering I will sacrifice to you;
I will give thanks to your name,
O God, for it is good.

For God has delivered me from every trouble,
and my eye has looked in triumph on my enemies. 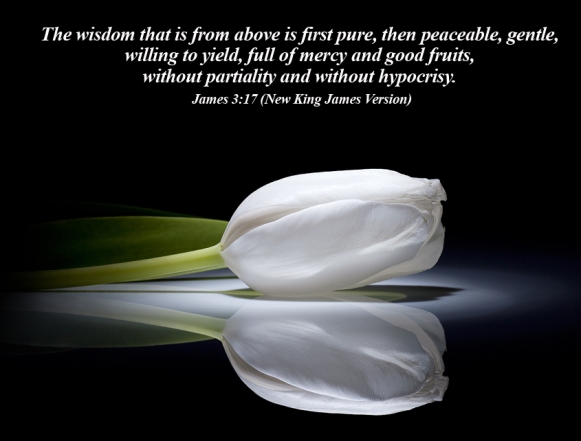 Who is wise and understanding among you? Show by your good life that your works are done with gentleness born of wisdom. But if you have bitter envy and selfish ambition in your hearts, do not be boastful and false to the truth. Such wisdom does not come down from above, but is earthly, unspiritual, devilish. For where there is envy and selfish ambition, there will also be disorder and wickedness of every kind. But the wisdom from above is first pure, then peaceable, gentle, willing to yield, full of mercy and good fruits, without a trace of partiality or hypocrisy. And a harvest of righteousness is sown in peace for those who make peace.

Those conflicts and disputes among you, where do they come from? Do they not come from your cravings that are at war within you? You want something and do not have it; so you commit murder. And you covet something and cannot obtain it; so you engage in disputes and conflicts. You do not have, because you do not ask. You ask and do not receive, because you ask wrongly, in order to spend what you get on your pleasures.

They went on from there and passed through Galilee. He did not want anyone to know it; for he was teaching his disciples, saying to them, “The Son of Man is to be betrayed into human hands, and they will kill him, and three days after being killed, he will rise again.” But they did not understand what he was saying and were afraid to ask him.

Then they came to Capernaum; and when he was in the house he asked them, “What were you arguing about on the way?” But they were silent, for on the way they had argued with one another who was the greatest. He sat down, called the twelve, and said to them, “Whoever wants to be first must be last of all and servant of all.” Then he took a little child and put it among them; and taking it in his arms, he said to them, “Whoever welcomes one such child in my name welcomes me, and whoever welcomes me welcomes not me but the one who sent me.”

This site uses Akismet to reduce spam. Learn how your comment data is processed.

“No matter who you are or where you are on life’s journey, you are welcome at Grace!”

Give To Grace Online!